You are here: Home / Static charge control in converting processes

Static charge is inevitable when converting materials. Although a finely tuned charge can be useful in some processes, it is harmful in many situations.
What causes static electricity in converting? And how can you control its adverse effects and improve your product’s quality?

Causes of static charge during converting

All materials consist of atoms. The atom’s nucleus consists of neutrons and protons (positively charged), the number of which determines the type of material. Around this nucleus revolve negatively charged electrons that balance the electrical charge of the protons. If the number of protons and electrons is equal, the material is neutral and not statically charged.

But as soon as materials come into contact with each other, they can exchange electrons. When that happens, the number of protons and electrons is no longer equal, and the material becomes statically charged. This is apparent through an attraction effect, a kind of invisible adhesion.
Why is this? The material that became static tries to restore the lost balance by attracting electrons from the surroundings.

Factors that determine the degree of static charge

What determines the degree of exchange and the resulting charge? Among other things, the characteristics of the material. The Triboelecktrische series indicates how easily a material gains or loses electrons. The further apart the materials are in the series, the more attracted they are to each other.

Environmental factors such as humidity also play a role in static charge. This explains why during frost, when the air is dry, there is much more static charge. Moist air is more conductive and can therefore absorb excess charges.

Above all, the degree of contact is an important factor in the generation of static charge: the higher the pressure during contact and the faster the separation speed, the greater the exchange of electrons. In the converting industry, contact with electrically charged objects — machines, rollers, winders — causes static charge of materials that often pass through at high speed.

What happens once the material is statically charged?

When an exchange of electrons occurs, the atom tries to rebalance the charge. In conductive materials like steel, electrons can move freely to neutralize a charge. Good grounding dissipates any excess.

But in non-conductive materials or insulators such as paper, plastic, or wood, the opposite happens. The electrons cannot move freely in these materials, so the material holds the static charge until it is exposed to a conductor or until the electron imbalance replenishes. You can see this clearly after the winding process in paper production, where static charge is still measured in stored paper rolls after years. 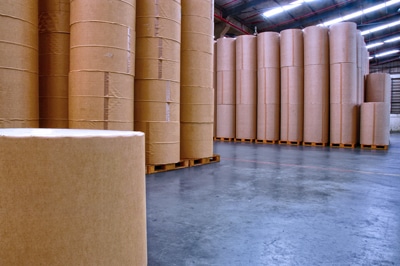 A non-conductive material like paper retains static charge until exposed to a conductor or until the electron imbalance replenishes itself. Therefore, static charge can remain present in stored paper rolls for many years.

What does static charge mean for your converting process and the quality of your product?

As long as the substrate is statically charged, it exerts its characteristic attraction force. In some processes, this attraction comes in handy. For example, in lamination or in stacking.
But when further processing materials — paper, cardboard, plastic — the static charge and resulting attraction cause problems such as:

In the event of a jam or misfeeds, it becomes immediately clear that the substrate is statically charged, people take measures immediately. And in an environment where there is a risk of explosion, there are strict safety precautions.
But number three, the attraction of dust and particles from the environment, may not be detected in time, resulting in:

As you can read in our article about the adverse results of dust in converting processes, it is clear that you need to control static charge and its consequences. So, which measures are available?

How can you control static charge during converting and reduce the resulting damage?

But remember that completely eliminating static charge is not possible. Slitting, rewinding, etc., constantly generates dust and fibers that come from the material itself. Until the end of the converting process, the substrate continues to exchange electrons and to attract dust, actually as long as it is in motion.

To deliver a clean product, it is necessary to remove this dust. That is before it gets coiled up or stacked between sheets. To achieve a thorough dedusting, Weducon developed the HE web cleaning system, a well-thought-out system consisting of ionization, suction, and filtration. (Read a detailed explanation of the Weducon cleaning principle here.)

Ionization (a cloud of negative and positive ions) balances the negatively or positively charged atoms. This lifts the static charge of the substrate. That is necessary because the moving substrate’s attraction effect creates an impermeable boundary layer that carries dust and contaminants. Ionization allows the air layer to break through, after which the cleaning process starts. After passing through the web cleaner, the substrate is clean. The removed dust does not enter the production environment but is collected in a self-cleaning filter.

It is clear that every converting process results in static charge of substrates. But taking the right measures prevents damaging consequences. Get in touch to discuss your production process; we gladly help you find the right solution for a clean, unhindered production process. 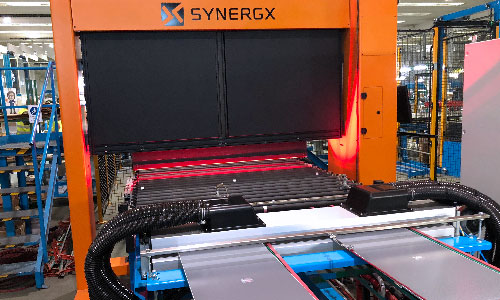 Effective surface cleaning operating on a glass conveyor line. Behind the … END_OF_DOCUMENT_TOKEN_TO_BE_REPLACED 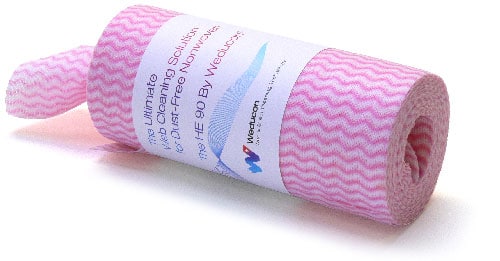 How to eliminate dust & fibers in nonwoven and supply safe quality within optimal production times!

With over 30 years of experience in web cleaning and dust elimination, we let our customers achieve optimal results by lengthening clean-up distances, increasing imprints and improving quality. Learn more about Weducon.

Cookies
Weducon uses cookies to remember your preferences, to improve your experience and to collect statistics to optimize site functionality and deliver content tailored to your interests.
Accept
Read more